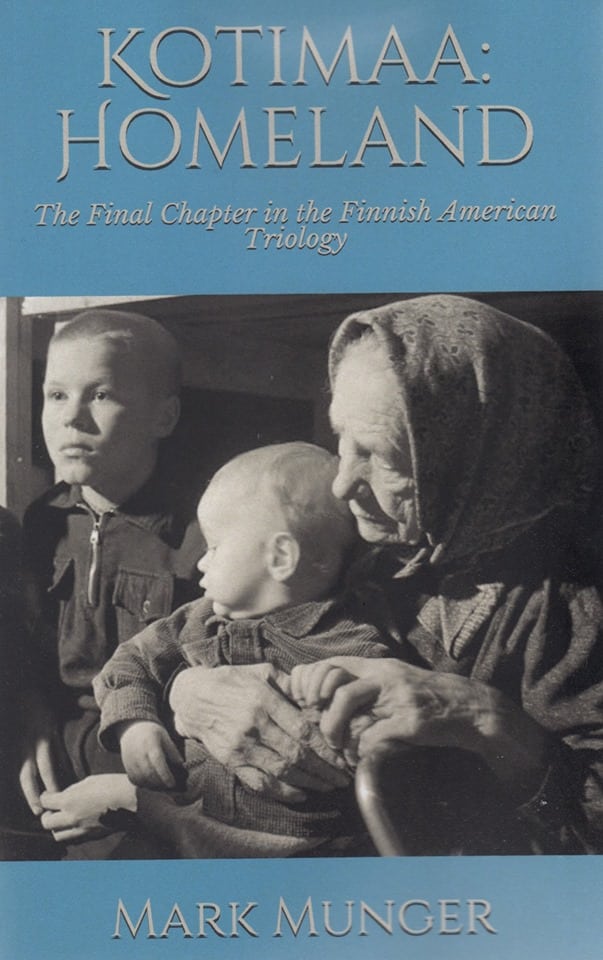 Immigrant Anders Alhomäki, introduced to readers in Munger’s best selling novel Suomalaiset, returns in this prequel. Why did Anders leave his homeland? What dreams motivated him to journey from Finland to sub-Arctic Norway, northern Michigan, and the Vermillion Iron Range of Minnesota? How is Anders’s story tied to that of a cold blooded assassin stalking a Finnish politician in modern day Finland? Don’t miss this epic ride from the 1890s to Finland’s Centennial Independence Day!

Mark is a life-long resident of Minnesota; born in St. Paul, and raised in Duluth. He is an honors graduate (and Hall of Fame member) of Duluth Denfeld. He is also an honors graduate of UMD (BA History/Political Science) and William Mitchell College of Law (JD).
After practicing trial law for nearly twenty years, Mark became a District Court Judge in 1998 and served a four-county region of Northeastern Minnesota until his recent retirement. He is now serving as a senior judge. Mark his wife Rene’ live along the banks of the wild and scenic Cloquet River north of Duluth. His writing has been published in Writer’s Journal, the Hermantown Star, the
Duluth News Tribune, the New World Finn, and other periodicals. Mark’s essay “Leaving Mayo” was a finalist for the 2000 Pirate’s Alley Faulkner Writing Award. His short fiction and essays have won publication/air time in contests with the Lake Superior Writers, the Northwestern Ontario Writers Workshop, Fond du Lac Tribal College, Wisconsin Public Radio, Minnesota Public Radio, and other organizations. His 2nd Finnish American novel, Sukulaiset: The Kindred was a semi-finalist for the 2012 Pirate’s Alley Faulkner Writing Award and was awarded a Finlandia National Association grant in 2014. He has written 10 books, including 6 novels, 1 collection of short fiction, 1 biography, and 2 collections of essays. Sukulaiset: The Kindred, (sequel to Suomalaiset )is a historical novel set in WWII Estonia, Finland, and Russia,
and has received high praise for story and historical accuracy. His last project before the current manuscript (Kotimaa: Homeland) was Boomtown, a contemporary legal drama involving copper/nickel mining set in Ely and Grand Marais. Boomtown was
released in the fall of 2016. Mark is a frequent lecturer and workshop leader on writerly topics as well as the winner of numerous writing contests. Mark is also a member of the Advisory
Board of Rural Lit R.A.L.L.Y. a joint project of Buena Vista University and Buffalo State College, a blog-driven effort to preserve late 19 th and early 20 th century novels depicting rural life in America. He is a member of the Lake Superior Writers and the Northwestern Ontario Writers Workshop. He was previously employed as a Senior
Lecturer at the University of Wisconsin-Superior where he taught Environmental Law, Paralegalism and Ethics, and Criminal Law.
Mark is a voracious reader and reviewer of books. His reviews may be found at www.cloquetriverpress.com, www.goodreads.com, and www.rurallitrally.org.