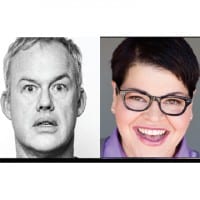 Often compared to David Sedaris and Oscar Wilde, James Judd shares his stories of “spectacular public embarrassments and utter failures.” An alumni of the famous Groundlings comedy troupe, and one of the New Faces of the Hollywood Improv, Judd’s stories include battling a viciously competitive 5th grade mean girl for the grand prize in The Book Report, and hand to hand combat with a hunger shark in How I Made My First Friend…in New England, winner of Snap Judgment’s Most Hilarious Story of the Year Award. His stories affirm that part of being human is telling the stories that have happened to us, and even in the face of failure, it’s getting up and moving forward that matters.

Jen Kober is originally from Lake Charles, LA, and has energetically bounded onto the national stage bringing crowds to their feet with her original blend of stand-up, storytelling, and improvised rock-n-roll comedy. Her hard-hitting hour is phenomenally funny as Kober commands the stage and dares you not to laugh. Jen was the 2016 Winner of NPR’s Snap Judgement Comedic Performance of the Year for her Girl Scout Cookie story which went viral upon its release earlier that year.