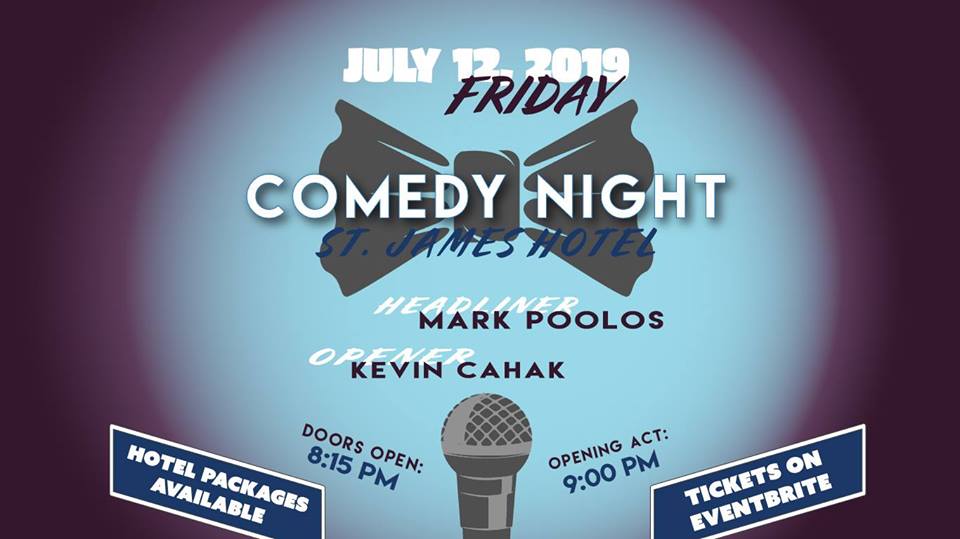 The last Comedy Night of the Summer! Grab some friends and laugh the night away. You won’t want to miss it!

Get to know the comedians!

Headliner: Mark Poolos
Mark Poolos is a Minnesota native who started his career as the co-star of two independent films, “Attack of the Killer Snow Cone Zombies” and “Joanie Loves Furbies.”

He did more films, some commercials and even a little theater but it wasn’t enough, so he began his stand-up comedy career. Mark is 6’7″ tall and weighs nearly 350 pounds, which means he’s technically a giant. However, he also happens to be quite weak and is admittedly a bit of a wimp, so his status as a giant is dubious at best.
In his comedy routines he weaves “tall” tales of his life as a bumbling jolly giant in a fast, engaging story telling style.

Opener: Wendy Maybury
Wendy Maybury grew up all over the US as a military brat and learned to make friends fast, which helped her develop the warm friendly style she now uses to entertain audiences all over the country.

She recently signed with Stand Up Records and her first album “She’s Not from Around Here” will debut this year.

She is also the producer of “Day Drinking with Mom” a show that offers comedy, sympathy and some drinks to help Moms relax and enjoy the roller coaster of parenting.Doors will open 45 minutes prior to the show.